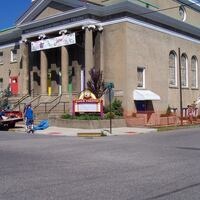 Charleston Light Opera Guild will present the singing and dancing classic, 42nd Street, at the Little Theater at the Charleston Coliseum & Convention Center (formerly the Civic Center) on April 26, 27 and May 3, 4, 5, 10 and 11, 2019.

Few shows can match the dazzling 42nd Street score by Al Dubin and Harry Warren containing hits like Lullaby of Broadway, Shuffle Off to Buffalo, About A Quarter to Nine, We're In the Money, and the title song, 42nd Street. The book by Michael Steward-Mark Bramble is adapted from the 1944 Warner Brothers film by the same name. 42nd Street is one hundred percent honest-to-goodness musical comedy.
42nd Street, set in 1933, celebrates the stuff dreams are made of. The 1944 movie starred Ruby Keeler and Dick Powell and featured big and bold dancing and production pieces created by Busby Berkley. The plot is simple - young girl from Allentown, Pennsylvania comes to New York to get into a show, star of the show breaks her ankle the night before the show opens out-of-town, and the young girl steps out of the chorus to take over the lead and make the show a hit and herself a Broadway star. In other words, the classic American dream.
The musical was first presented on Broadway in 1981 and received a Tony Award for Best Musical. It was the last creation of noted film star and Broadway director/choreographer, Gower Champion, who succumbed to cancer on opening night.
Charleston Light Opera Guild previously presented 42nd Street in 1987 and 2001.