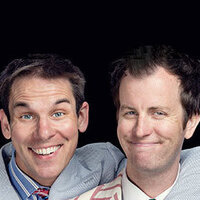 Back by popular demand, the American Shakespeare Center returns to FestivALL Fall, this time with their production of The Comedy of Errors. In this rollicking farce, Shakespeare elevates Roman comedy to dizzying heights. Two long-separated twins, their two tricky servants (also twins), a jealous wife, and her lovelorn sister romp through this fast-paced comedy. Filled with mistaken identities and slapstick humor, The Comedy of Errors will have audiences laughing from the first confusion to the last.

The American Shakespeare Center’s unique performance style blends Shakespeare’s stage craft with modern sensibility. Described as “shamelessly entertaining” by The Washington Post, this award-winning company follows the basic principles of a Renaissance theatrical production to give its audiences a fully lit and interactive experience.