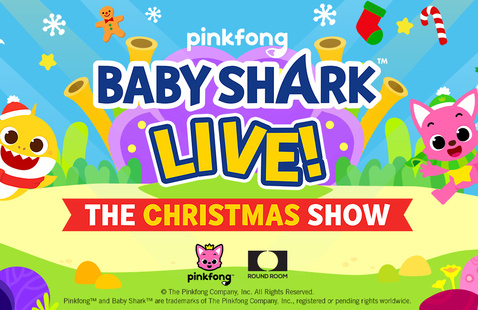 https://www.chaswvccc.com/events/2022/baby-shark-live-the-christmas-show
View map
Add to calendar
Save to Google Calendar Save to iCal Save to Outlook

This special Holiday experience will have fans of all ages dancing in the aisles as they join Baby Shark and friends for exciting adventures into the jungle and under the sea to explore shapes, colors, numbers and so much more. Enjoy hit songs in this dazzling kids spectacular, including “Baby Shark,” “Five Little Monkeys,” “Wheels On The Bus,” and “Monkey Banana Dance,” as well as Holiday classics such as “Jingle Bells”, “We Wish You A Merry Christmas” and more!

Based on The Pinkfong Company’s viral sensation Baby Shark, the inaugural tour of Baby Shark Live! launched in the Fall of 2019 and played to sold out crowds across the country with record-breaking attendance in cities including New York City, Los Angeles, Chicago, and Boston. The show – which has played more than 145 shows to date – was a favorite of both celebrities and press, including The New York Times, New Yorker, LA Times, CNN, TODAY Show, Good Morning America, and more.