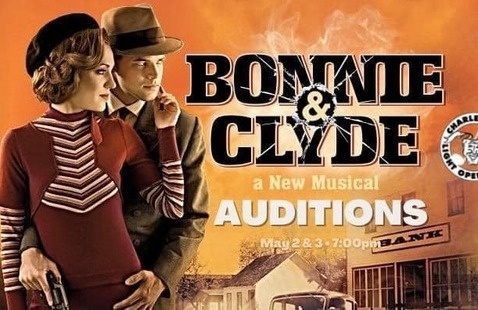 https://www.charlestonlightoperaguild.org/ #cwv
View map
Add to calendar
Save to Google Calendar Save to iCal Save to Outlook

The Charleston Light Opera Guild will present multiple performances of ‘Bonne & Clyde” between June 17 and 26, 2022 during FestivALL at the Guild Theater!

“Bonnie & Clyde” is a musical with music by Frank Wildhorn, lyrics by Don Black and a book by Ivan Menchell. The score combines blues, gospel, rockabilly with traditional Broadway music.

At its core the play is a fractured love story. The legend of the ill-fated couple who achieved folk hero status during the great depression was born from the hard times of the 1930s. It was a time in our nation's history when desperation and love combined to create the most notorious couple this country has ever known.

The world premiere of the musical occurred in San Diego, California in 2009 and debuted on Broadway in 2011 with Laura Osnes and Jeremy Jordan playing the infamous couple. Subsequent productions have been produced nationally and internationally with the latest debuting in London's West End this April 2022.