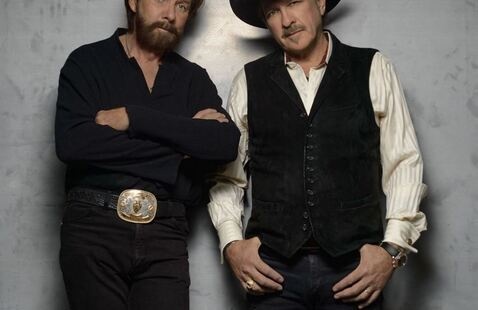 Charleston Coliseum & Convention Center , Coliseum View map
Add to calendar
Save to Google Calendar Save to iCal Save to Outlook

https://www.chaswvccc.com/events/2022/brooks--dunn-reboot-tour-2022 #CWV
View map
Add to calendar
Save to Google Calendar Save to iCal Save to Outlook

With 20 No. 1 hits stretching back to 1991, two GRAMMY awards, dozens of ACM and CMA honors and a discography counting more album sales than any duo in history – regardless of genre – Brooks & Dunn’s influence on today’s country has never been in question. Hits like “Boot Scootin’ Boogie,” “My Maria” and “Believe” have propelled the duo to more than 30 million albums sold, with the New York Times heralding “together they helped drive the power-country era of the early-to-mid 1990s and continued to benefit from the sea change in the genre they helped initiate right through their most recent albums.” Their original “Merle Haggard meets The Rolling Stones” vibe made them progressive stars in their own right. The duo’s recently released collaboration project REBOOT debuted at No. One on Billboard’s Top Country Albums. The impressive feat marks the first time the duo has topped the album charts since 2009 while simultaneously earning the duo their 10th Billboard 200 Top 10 album, the most of any country duo or group in the chart’s history. In 2019 the duo was inducted into the Country Music Hall of Fame in the “Modern Era Artist” category.