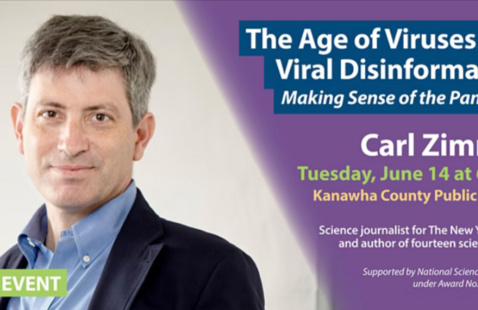 https://festivallcharleston.com/event/chancellors-stem-speaker-series/ #festivallcwv
Add to calendar
Save to Google Calendar Save to iCal Save to Outlook

Bringing a variety of science, technology, engineering, and math speakers to WV’s capitol city, the Chancellor’s STEM Speaker Series presents Carl Zimmer, science journalist, for his talk “The Age of Viruses and Viral Disinformation: Making Sense of the Pandemic”.

Zimmer writes for the New York Times, National Geographic, and NPR, as well as many popular books.

Zimmer is a familiar voice on radio programs such as Radiolab and professor adjunct at Yale University. He is, to his knowledge, the only writer after whom both a species of tapeworm and an asteroid have been named.

The STEM Speaker Series began in 2014 with a goal of communicating science, technology, engineering and math (STEM) research to all West Virginians.