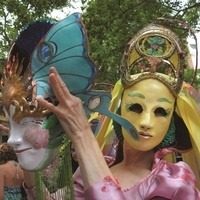 Presented by Charleston Light Opera Guild, from Grammy award-winning Edie Brickell and Grammy, Emmy and Academy-award winning Steve Martin comes Bright Star, the five-time Tony nominated new musical play that the New York Times called “a shining achievement.” Directed by Nina Denton Pasinetti and inspired by a real event, this bluegrass musical tells a sweeping tale of love and redemption set against the rich background of the American South in the 1920s and 40s. Editor Alice Murphy enters a literary relationship with a young soldier just home from World War II that awakens her longing for the child she once lost and sets her on a journey to understand her past. Propelled by a 20 person cast and onstage musical ensemble led by musical director/accompanist David Patrick, the story unfolds as a tapestry of deep emotions and beautiful melodies.

Sponsors: Alex & Betty Schoenbaum Foundation and made possible at FestivALL by University of Charleston