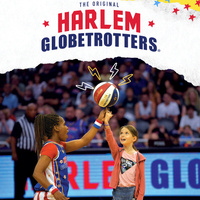 The Harlem Globetrotters are worldwide icons, synonymous with family entertainment and great basketball skills. The Globetrotters represent 90-plus years of breaking down barriers, acts of goodwill and a commitment to fans that goes beyond the game.

Abe Saperstein founded the team in 1926, and they played their first road game in Hinckley, Illinois, on Jan. 7, 1927. Since then, the Globetrotters have entertained more than 148 million fans in 123 countries and territories worldwide, introducing many to the sport of basketball. The team are pioneers in popularizing the slam dunk, the fast break, the forward and point guard positions, and the figure-eight weave. In 2010, the Globetrotters also introduced the first-ever 4-point shot, a shot located 30 feet from the basket – almost 7 feet beyond the NBA’s three-point arc.

The victories over the Lakers accelerated the integration of the NBA, as Globetrotter Nathaniel “Sweetwater” Clifton became the first African-American player to sign an NBA contract when he joined the famed New York Knicks in 1950. The Globetrotters also embarked on their first-ever international tour in 1950, played before their largest crowd ever – 75,000 – at Berlin’s Olympic Stadium in 1951 and finished the decade with their first-ever trip to the Soviet Union in 1959.