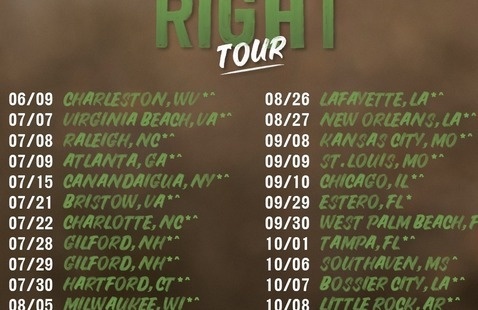 Five-time Entertainer of the year Luke Bryan, who in his career has played sold-out shows for 12+ million fans inclusive of nearly 40 stadium concerts, Spring Break shows, Farm Tours and seven sold-out Crash My Playa destination concerts, is revealing the details of his RAISED UP RIGHT TOUR.

The tour will launch on June 9 in Charleston, West Virginia at teh Charleston Colsieum featuring Riley Green, Mitchell Tenpenny and DJ Rock and playing 30+ cities before wrapping in late October.

Promoted by Live Nation, tickets go on sale this Friday, February 4 at 10am local time at Lukebryan.com. “My favorite place to be is on stage performing to country music fans,” said Luke. “So thankful every night when I walk out on that stage and know you are there to have a blast along beside me. It never gets old!” The tour takes its name from the chorus of Luke’s current smash single “Up,” which is the sixth single from Luke’s #1 debuting BORN HERE LIVE HERE DIE HERE album.  Watch the “Up” video HERE.