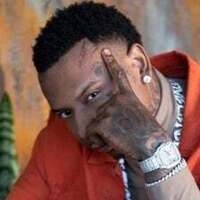 Moneybagg Yo, is an American rapper, who recently released on June 1, 2021 the standalone single, "Rookie of the Year", an ode to basketball player Ja Morant. His album A Gangsta's Pain, released in April 2021 has become his first chart-topping project and includes feature guest appearances from Kaash Paige, BIG30, Future, Polo G, Lil Durk, Jhené Aiko, and Pharrell Williams. His other projects, Time Served, debuted at number 3 on the Billboard 200 in January 2020, Federal 3X and 2 Heartless, debuted at No. 5 and No. 16 on the Billboard 200, respectively.