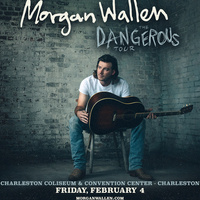 Morgan Wallen has made his mark as "the most wanted man in country” (The New Yorker) with over 7 BILLION on-demand streams, multi-platinum certifications, and four consecutive #1 hits. His record-shattering, platinum sophomore effort Dangerous: The Double Album (Big Loud/Republic Records) topped the Billboard 200 Albums chart for 10 consecutive weeks upon release, stayed #1 atop the Billboard Top Country Albums chart for 32 weeks and counting, and earned the biggest streaming week for a Country album in history.
The Dangerous Tour includes special guests HARDY and Ernest