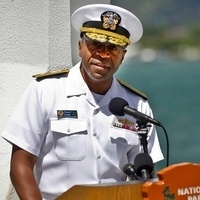 Sailors from across the United States are coming to Charleston, West Virginia, Oct. 7-13 to show the Navy to the community.