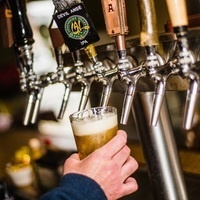 On September 28th, Andy Frasco & the U.N. will return to Charleston and bring a change of pace to OktoberWest with his jubilant jambalaya of rule-breaking rock n roll. Support will be provided by the groove, grit, and guitar-heavy swagger of Wild Adriatic and the reggae and roots of local opener Rasta Rafiki!

In its 12th year, OktoberWest presented by BrickStreet is West Virginia’s largest traditional German Octoberfest and among the largest craft beer festivals in the state. After a record-setting attendance of 2,200 in 2018,  another exciting year is expected with more local West Side businesses participating this year.

Sample over 100 craft brews, and several limited Octoberfest and German varieties, and listen to three incredible bands at this year's festival on September 28th from 4 - 9 PM.  Stein holding, keg rolling, and best traditional dress contests will return! It’s all about the craft brews, local foods, and live tunes on the City National Bank Stage!