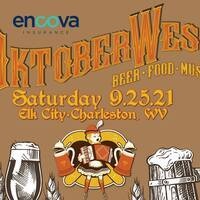 OktoberWest presented by Encova Insurance is West Virginia’s largest traditional German Octoberfest and among the largest craft beer festivals in the state. After record-setting crowds in 2018 and 2019, another exciting year is expected with more local West Side businesses participating this year. Sample over 100 craft brews, and several limited Octoberfest and German varieties, and listen to three incredible bands at this year's festival on September 25th from 4 - 9 PM.

All funds raised from OktoberWest will go directly back into Charleston’s Main Streets - West Side's programs, public art, and other community and economic revitalization projects.