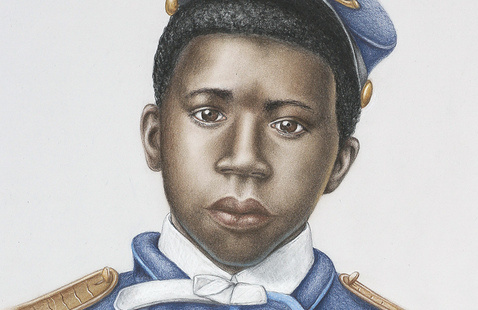 The Craik-Patton House, Conference Room View map Free Event
Add to calendar
Save to Google Calendar Save to iCal Save to Outlook

http://www.craikpattonhouse.org
View map Free Event
Add to calendar
Save to Google Calendar Save to iCal Save to Outlook

Seventeen Men is the creation of professional artist, illustrator, and genealogist, Shayne Davidson of Ann Arbor, Michigan, who uncovered an album containing Civil War-era photographs of men primarily from the Mid-Atlantic region who served in Company G of the 25th United States Colored Troops Infantry Regiment.

Using the photographs that she had obtained, Davidson created life size portraits of these soldiers and supplemented their images with detailed biographies, an endeavor which allows viewers to truly see these subjects as living men.

Since 2017 this work has been on display as a solo exhibit at nearly a dozen museums and will finally be available to guests visiting the Craik-Patton House in early 2022.

“African Americans who served in the United States military during the Civil War haven't received the recognition that they deserve,” states Craik-Patton Executive Director Nathan Jones, “we are thankful for Davidson’s work and our partners at Civil War Trails for allowing us to share this exhibit with the community.”

Seventeen Men: Portraits of African American Civil War Soldiers will be available to the public for free during regular and extended visiting hours. Visit www.craikpattonhouse.org or the Craik-Patton House Facebook page to learn more.