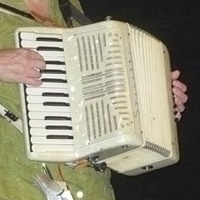 The Wild Ones plays a mix of traditional music on fiddle, accordion, piano and hand drums. While rooted in Celtic, New England and Appalachian styles, Paula Bickham’s accordion and hand drums add a distinctive eastern-European flavor that allows them to play a little around the edges of the tradition.

The Wild Ones have been playing contra dances since 2005. They've played annually for FOOTMAD (Charleston, WV Friends of Old Time Music and Dance), and also in several other dance communities including Columbus, OH, Brasstown, NC, Charlottesville, Harrisonburg, and Floyd VA, and Carrboro, NC

Rita Ray had talked for years about getting back to the piano when she retired as director of WV Public Broadcasting. Some time early in the 21st century, she decided not to wait, and played her first public dance in 2005. And now that she's retired, she spends big chunks of time getting better and better!

Paul Epstein has been playing music as an avocation for over 40 years in different bands. He is a prolific writer of songs and tunes and has three CDs of his own and two with Contrarians. He fiddles with the Contrarians, a popular contra dance band that has delighted dancers from NY to GA, Washington D.C. to Indiana.

Join us in the bar area of BK for dinner and/or a drink and some lively music--no admission.

Paula J. Bickham, Ph.D. has a life-long involvement with music, learning piano at the age of nine and playing for 12 years. She took up accordion when she lived and worked in Louisiana . Recently she has been playing Traditional Celtic and Appalachian music on it with the Wild Ones. For over twenty years, she has also focused on hand-drumming and rhythms from West Africa, the Caribbean and the Middle East.