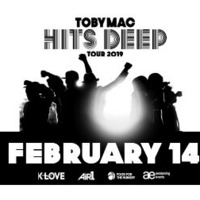 With more than 5 million units in career sales and a whopping seven GRAMMY® Awards, TobyMac's career continues on the fast track. His most recent RIAA Certified Gold studio album, THIS IS NOT A TEST garnered a GRAMMY® Award, Billboard Music Award nomination on top of a high marking debut at No. 4 on the Billboard Top 200. Each of his six studio solo projects have achieved Gold certification, a first for any artist in the history of his label, Capitol Christian Music Group. Among those EYE ON IT, which debuted atop the Billboard 200, only the third ever Christian album to do so.