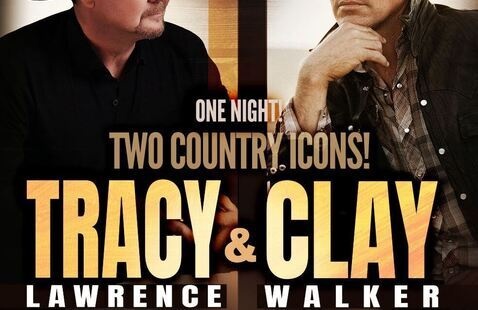 One Night, Two Icons: Sharing One Stage, Performing Together with a Full Band
Tracy Lawrence is an American country music singer, songwriter, and record producer. Born in Atlanta, Texas and raised in Foreman, Arkansas, Lawrence began performing at age 15 and moved to Nashville, Tennessee, in 1990 to begin his country music career. He signed to Atlantic Records Nashville in 1991 and made his debut late that year with the album Sticks and Stones. Five more studio albums, as well as a live album and a compilation album, followed throughout the 1990s and into 2000 on Atlantic before the label's country division was closed in 2001. Afterward, he recorded for Warner Bros. Records, DreamWorks Records, Mercury Records Nashville, and his own labels, Rocky Comfort Records and Lawrence Music Group. Lawrence has released a total of 14 studio albums. His most commercially successful albums are Alibis (1993) and Time Marches On (1996), both certified double-platinum by the Recording Industry Association of America (RIAA). He has charted more than forty singles on the Billboard Hot Country Songs charts, including eight songs that reached the number one position: "Sticks and Stones", "Alibis", "Can't Break It to My Heart", "My Second Home", "If the Good Die Young", "Texas Tornado", "Time Marches On", and "Find Out Who Your Friends Are". Of these, "Time Marches On" is his longest-lasting at three weeks, while "Find Out Who Your Friends Are" set a record at the time for the slowest ascent to the top of that chart. His musical style is defined mainly by neotraditional country and honky-tonk influences, although he has also recorded country pop, Christmas music, and Christian country music. He has won Top New Male Vocalist from Billboard in 1992 and from Academy of Country Music in 1993, and Vocal Event of the Year from the Country Music Association in 2007.

Clay Walker was discovered in a Beaumont area bar by noted producer and head of Giant Records James Stroud (Toby Keith, Tracy Lawrence, Tim McGraw, Kenny Rogers), Walker was in his early twenties when he started rattling off a string of smash hits. Among them, “Live Until I Die,” “Dreaming With My Eyes Open,” “This Woman And This Man,” “Hypnotize The Moon,” “Rumor Has It,” “Then What,” “I Can’t Sleep” and “She Won’t Be Lonely Long.” His self-titled debut album rocketed to platinum status, the first of four to cross the million-sold mark. Racking up more than 30 charted singles and 11 No. 1s wasn’t without its struggles, however. “Being born and raised in the Houston area, I thought of myself in the line of George Strait and Clint Black, but my first producer had other ideas,” Walker says. “James Stroud pushed me more towards pop sounds I fought with. What he was saying, and I think he was right, was, ‘Clay, you’ve got some gears to you that will excite people if you let it.’ I was young – 23 – and didn’t really settle with that. But now I’m in a sweet spot in music, in life, and I definitely feel the audience has swung around to appreciating music that makes those connections.” There’s more to the duality of Clay Walker’s debut Show Dog Nashville album Texas To Tennessee than the title. Certainly, the realities of place are as central as this comeback album’s name implies: Nashville busily working toward the next fresh hit; Texas moving at its inimitable and familiar pace. There’s also a mix of songwriting and production approaches, evident and more nuanced relationships between the songs themselves, and the overarching presence of a naturally gifted vocalist who relentlessly pursues his own development as a singer. But don’t mistake those dualities for dichotomy – and certainly not polarity. In a storied career dotted with smash singles, platinum albums and countless honors and acclaim, maybe the connection between country’s timeless themes and music-of-the-moment timeliness has been there all along.
Many of the country fans behind the almost 20 million on-demand and video streams for his latest single “Need A Bar Sometimes” – who may also be among his 750,000 TikTok followers