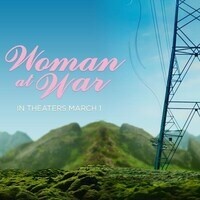 About the film:
Halla is a 50-year-old environmental activist who crusades against the local aluminum industry in Iceland. As her actions grow bolder, her life changes in the blink of an eye when she's finally granted permission to adopt a girl from the Ukraine.

What the critics are saying:
Woman at War is an environmental drama wrapped in whimsical comedy and tied with a bow of midlife soul-searching.
Jeannette Catsoulis
The NYTimes

Woman at War has all the contours of a taut, paranoid thriller, if you can imagine that set within the tidy, brightly-lit environs of Iceland, rather than the shadows of Wall Street or Washington.
Ann Hornaday
Washington Post

Woman at War takes its tone not from Van Trier but deadpan pranksters like the Finnish Aki Kaurismaki, whose absurdities have an undercurrent of tragedy.
David Edelstein
Vulture