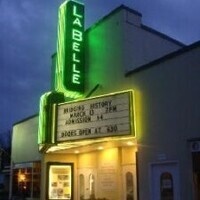 Walter B. Urling built the original LaBelle, and named the theatre after “Isabelle”, both his daughter’s and mother’s name.  The LaBelle continued to function as a movie house, enduring a name change to Cinema South in the late 1960’s, but closed in the 1980’s. The building served as a church through the 1990’s.  In 2003, the City of South Charleston purchased the building, and work continues to bring The LaBelle back to life again as a working theatre.